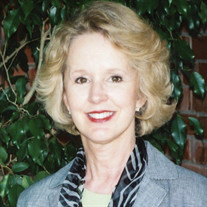 Corrie Sargeant, born May 20th, 1947, went home to be with her Lord Jesus on November 22nd, 2020 after an extended battle with Alzheimer’s. Born Corrie Condre (Connie) Smith to parents Clayton and Hazel Scott (Scottie) Smith, she was the oldest of four children (Martha, Charlotte, and Clayton). She loved her parents, sisters and brother greatly her entire life. Growing up in Carthage, MO, she moved to Staunton, VA after high school and attended Mary Baldwin University. After four years, to include a year abroad in Madrid, she graduated with a Bachelor of Arts in 1969. In August of 1969, Corrie married her college sweetheart, Rowell Sargeant and they set off on a life together marked by love, laughter, adventure, and incredible companionship. After marrying Rowell, Corrie returned to flying internationally with TWA based out of New York City before moving to Jacksonville, NC where she started a family. It was at this time, that Corrie first became a mother with the birth of their daughter, Meghan Elizabeth in 1972. It was also during these early years of marriage that Corrie and Rowell first felt their great need for a savior and through prayer and guidance, they both gave their hearts to Jesus, and with Corrie’s usual faithfulness and determination, she began to pursue Him and this decision and God’s grace shaped every future decision she made. In 1975, while living in Denver, CO, Corrie became a mother for the second time when Clayton Rowell was born. She was having so much fun raising children, that they decided to have another one 13 months later when Preston Scott was born in Colorado Springs, CO in 1976. Moving back to Carthage, MO to be closer to family, they began to serve as foster parents at which time they met and fell in love with the boy that would complete their family adopting Samuel Benjamin in 1980. Over the years, she made time for all of the activities her children pursued including athletics, school, church, and other extracurricular activities while continuing to serve in the church through various Bible studies and opportunities to mentor new wives and young women. Staying very busy, she never missed an opportunity to date her husband or remind him that he was her number one. As the children grew older, Corrie, with the support of her husband and family, decided it was time to pursue a goal she held for a long time and go back to college to obtain a Nursing degree. After years of hard work and study, Corrie graduated with Honors from Southern Nazarene University and began her work. Viewing her role as a nurse as a way to minister to others and serve the Lord, Corrie began her career working in oncology before transferring over to become a Hospice Nurse; traveling all over Oklahoma County to care for patients and minister to families preparing to say good bye to loved ones. Desiring to spend more time with her best friend and husband, her children and grandchildren and her many friends, Corrie left nursing and committed herself to the next phase of her life. Staying active in her church, she and Rowell began to spend more time traveling to visit children and her beloved grandchildren while also reconnecting with friends across the country until she was no longer able to travel. Corrie was one of the kindest and most gentle women and all who knew her knew they had a friend that would be loyal and loving. Her children were incredibly blessed to have a mother so dedicated to them and so willing to live out the things that were most important and most critical that they learn. Among so many lessons she imparted, the most important were living out her faith and love for God, selfless devotion to her husband, and unconditional love for her family. She will be greatly missed, but we are so thankful that she is in the arms of her Savior. Corrie was preceded in death by her parents, her brother Clayton Smith his daughter Diana and her nephew John Daniel Hawkins. She is survived by her husband of 51 years, Rowell, her daughter Meghan Sponenberg and son-in-law Steve and their children Chase and Julia Jane, son Clayton and daughter-in-law Lauren and their children Sophie and Sam, son Scott and daughter-in-law Amy and their children Lucy, Trigg and Clayton and son Ben and his children Katelyn, Ashley, and Isaiah with daughter-in-law Mary Sargeant Calero. She is also survived by her sister Charlotte Dunaway and brother-in-law Garvin, sister Martha Smith, sisters-in-law Jackie Hawkins, Julia Kirk Sargeant and Laura Smith Brubaker and brother-in-law Preston Sargeant and sister-in-law Ann, as well as 12 nieces and nephews all of whom she loved greatly. A memorial service will be held at 10 a.m. Saturday, November 28th in the chapel at Crossings Community Church 14600 Portland Ave, Oklahoma City, OK 73134. The family has asked that you please wear a mask if you are planning on attending the service. In lieu of flowers, please send donations to the Alzheimer's Organization of Oklahoma - 6601 Broadway Ext suite 120, Oklahoma City, OK 73116 (405) 319-0780 or by going to https://www.alz.org/oklahoma Her children rise up and bless her; Her husband also, and he praises her, saying: “Many daughters have done nobly, but you excel them all.” Proverbs 31: 28-29

Corrie Sargeant, born May 20th, 1947, went home to be with her Lord Jesus on November 22nd, 2020 after an extended battle with Alzheimer&#8217;s. Born Corrie Condre (Connie) Smith to parents Clayton and Hazel Scott (Scottie) Smith, she was... View Obituary & Service Information

The family of Corrie Sargeant created this Life Tributes page to make it easy to share your memories.

Send flowers to the Sargeant family.