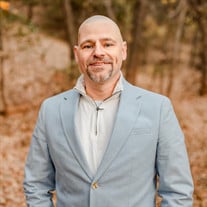 A come-and-go visitation will be from Noon-7pm on Tuesday, June 7th at Crawford Funeral Service with the family present for a reception from 5-7pm. A service celebrating Colby's life will be at 11am on Wednesday, June 8th at Henderson Hills... View Obituary & Service Information

The family of Dr. Colby Garrett McLaurin created this Life Tributes page to make it easy to share your memories.

A come-and-go visitation will be from Noon-7pm on Tuesday, June...

Send flowers to the McLaurin family.