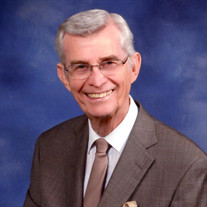 A service celebrating the life of Clyde Cain will be at 11:30am on Monday, October 12th at Edmond's First Baptist Church. Dr. Clyde Cain, ThD, DMin, was born at home in Canadian, TX to J.C. and Jennie Lee Cain in 1935 and went to his home in Heaven this past week on his 85th birthday. Clyde spent his first 18 years in Canadian and always had a special love for his home town. He always enjoyed sharing stories of his school days, grocery store job, and of course, the Canadian Wildcats’ sports teams! He gave his heart to Jesus as a 9 year old in the First Baptist Church of Canadian and later answered God’s call to the ministry at the age of 16 in 1952. Clyde was ordained into the ministry in 1955. After graduating from Canadian High School, Clyde began his B.A. in English and Bible at Wayland Baptist University in Plainview, TX. There he met and fell in love with the “apple of his eye”, Kay. After an awkward initial conversation in which Kay said that she “could never be a preacher’s wife,” Clyde eventually won her heart. They married in 1957 and have served God together for over 63 years. Clyde and Kay have two children, Craig (Alicia) and Kari (Eric). They are proud of their five grandchildren: Bailee (Christian), Sydney, Ashlyn (Gage), Colton, and Shelby. Clyde is also survived by his sister Madelyn. Clyde was preceded in death by his parents, younger brother, Dale, a niece and a nephew. In addition to being the proud uncle of 4 nieces and 4 nephews, he was also blessed with several loving cousins. Clyde always believed a pastor should continually study to advance their knowledge of God’s Word. After graduating from Wayland Baptist University (which presented him with a Distinguished Alumni Leadership Award in 2012) in 1958, Clyde earned a Masters of Divinity from Southwestern Baptist Theological Seminary in Ft. Worth, TX, in 1961. Around 1970, he completed a Doctorate of Theology at Luther Rice Seminary in Florida. He followed this degree with a Doctorate of Ministries from Southwestern Baptist Theological Seminary, with honors, in 1989. Clyde’s 68th anniversary of his call into the ministry was this past July, a milestone representing his service of nearly seven decades to the advancement of the Lord’s kingdom by pastoring several churches and leading countless people to a personal relationship with Jesus. Churches he pastored were a mission church of First Baptist Canadian, Pecan Grove Baptist Church, First Baptist Churches of Vega and Silverton, Avondale Baptist Church of Amarillo (all in Texas), and First Baptist Guymon, OK. Clyde began serving all Southern Baptists in Oklahoma in late 1974 by becoming the Associate Director of Evangelism for The Baptist General Convention of Oklahoma. Clyde wore many hats during his service with Oklahoma Baptists and finally retired in the early 2000’s after serving as the Director of Ministerial Services, counseling churches in conflict, and representing the Annuity Board in Oklahoma. An additional area of service that was a pure joy for Clyde was directing and teaching in the Southwestern Baptist Theological Seminary Extension Program at Oklahoma Baptist University, a program he helped establish and nurture for over 30 years. Many of Clyde’s former students remained in contact with him, and he always enjoyed their calls and visits. Additional sources of enjoyment were memories of mission service in India, Hong Kong, and Africa. After “retirement”, Clyde continued to follow God’s leading by serving churches across Oklahoma as an interim pastor. His wife Kay frequently traveled with him as they loved and served congregations and prepared them for a permanent pastor. Clyde Cain was a “pastor’s pastor”. He honored God, was faithful to his loving wife, loved and provided for his family, and mentored pastors and students. He always pointed to the necessity of a personal relationship with Jesus Christ. As he battled two cancers and the side effects of chemotherapy over the past five years, he was continually upbeat and rarely complained. He continued to serve his much-loved Edmond’s First Baptist Church as an adult group teacher and also continually shared Christ with others he encountered daily. We know that Jesus welcomed you home with, “Well done, thou good and faithful servant.” We will always love you Dad and Papa! A celebration service will be held at Edmond’s First Baptist Church at 11:30 AM, Monday, October 12, 2020. It will be live streamed at www.fbcedmond.org/livestream . Additional information can be read at www.crawfordfuneralservice.com. In lieu of flowers, we ask that you please consider a donation to Oklahoma Baptist Homes for Children (www.obhc.org), Friendship International Wives Program (www.edmondfriendship.org), or the Building Fund at Edmond’s First Baptist Church (https://www.fbcedmond.org).

A service celebrating the life of Clyde Cain will be at 11:30am on Monday, October 12th at Edmond's First Baptist Church. Dr. Clyde Cain, ThD, DMin, was born at home in Canadian, TX to J.C. and Jennie Lee Cain in 1935 and went to his home... View Obituary & Service Information

The family of Clyde Cain created this Life Tributes page to make it easy to share your memories.

A service celebrating the life of Clyde Cain will be at 11:30am...

Send flowers to the Cain family.