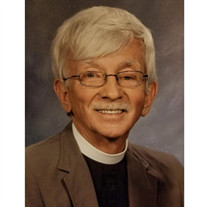 The Reverend Doctor Clifford Richard Horvath went peacefully to be with the Lord on January 9th, 2021. He was born on February 12, 1935 to European Immigrants Jessie and Lazlo Horvath in Astoria, New York. He attended Stuyvesant High School in Manhattan and Berkeley Divinity School at Yale in New Haven, Connecticut where he became a priest in the Episcopal church and was ordained in 1962. He later obtained his Doctorate in Ministry from Fuller Theological Seminary in Pasadena, California. He served many parishes beginning at Christ Church in Springfield, MO, where he met and married his wife of 58 years, Nedda Jane White Horvath. He then served at Grace Church in Massapequa, New York where his daughter, Beth was born, followed by St. Peter’s in Monroe, Connecticut, where his daughter, Jennifer was born. He spent 25 years at Church of the Resurrection in Miami, Florida, where he was actively involved in the community through the Diocese, Kiwanis, Youth With A Mission, Food For The Poor and many other organizations. His last Parish was St. Augustine’s in Oklahoma City where he spent eight years as Rector until his retirement in 2000. While in Florida and Oklahoma he regularly hosted shows on the Trinity Broadcasting Network where he and his wife interviewed people active in Christian ministries. During retirement, they moved closer to family in Muskogee, where he became actively involved as a Chaplain for St. Francis Hospice. He especially enjoyed the opportunity to be a speaker for Food For The Poor for several years which allowed him to travel all over the country promoting and supporting international missions in the Caribbean and Central America where he could minister to those with greatest need. He never truly retired from ministering to people, even after his diagnosis of Alzheimers. He is survived by his wife of 58 years Nedda Jane White Horvath, his daughter Beth Rapp and son in law Phil Rapp, his son in law Tex Dixon, his grandchildren Haley Dixon, Christian Dixon with wife Taylor Dixon and great granddaughter Eden, Janey Rapp and Robin Rapp. He was preceded in death by his daughter Jennifer Dixon and great grandson, Samuel Dixon.

The Reverend Doctor Clifford Richard Horvath went peacefully to be with the Lord on January 9th, 2021. He was born on February 12, 1935 to European Immigrants Jessie and Lazlo Horvath in Astoria, New York. He attended Stuyvesant High School... View Obituary & Service Information

The family of Rev. Dr. Clifford R. "Cliff" Horvath created this Life Tributes page to make it easy to share your memories.

Send flowers to the Horvath family.