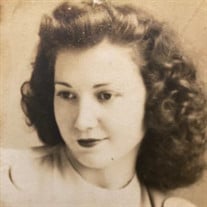 Claudia E. Simonton was called to her heavenly home on May 21, 2020, at the age of 94. Claudia was born in Shamrock, OK, on December 23, 1925, to Elmer Speck and Carrie Huddleston Speck. Elmer worked for Magnolia Oil and soon moved to Davenport, OK, where Claudia attended school and graduated from Davenport High School in 1944. After graduation, Claudia worked for the phone company and was working the day she received a call informing her that her fiancée, Frank “Todd” Simonton, was severely wounded in action in the Rhineland Campaign at Wingen-sur-Moder, France, in January 1945. Frank returned to Oklahoma and married Claudia, his high school sweetheart, on May 8, 1945, which happened to be Victory in Europe Day. The newlyweds moved to Norman where Frank attended OU and after graduation, Frank soon was employed by a young computer company named International Business Machines. During the next 36 years with IBM, Frank and Claudia moved five times: Rochester MN, San Jose CA, Tulsa OK, Kansas City KS, and then to Edmond OK in 1975. Edmond has been home for the last 45 years. Claudia loved to scour antique shops, explore Oklahoma towns and museums, and travel. Many memories were made as Frank and Claudia traveled with friends and family to Europe and 49 of the United States. More important than any earthly endeavor was Claudia’s love for the Lord and her effort to depend on Him in every situation. Her favorite verse was Romans 8:31, “If God be for us, who can be against us?” Claudia was preceded in death by her husband, Frank, as well as her parents and four siblings: Grover, Alice, Euva, and Willard. She is survived by her eldest daughter and son-in-law, Lea and David McBride, youngest daughter, Carrie Todd, and two wonderful grandchildren, Kennedy and Jackson. Claudia is also survived by her youngest brother and his wife, Edward Speck and Phyllis Jenkins Speck of Belton TX, as well as much loved nieces and nephews. Interment will be at Davenport Cemetery. The family is thankful for the care and support provided by Faith Hospice.

Claudia E. Simonton was called to her heavenly home on May 21, 2020, at the age of 94. Claudia was born in Shamrock, OK, on December 23, 1925, to Elmer Speck and Carrie Huddleston Speck. Elmer worked for Magnolia Oil and soon moved to Davenport,... View Obituary & Service Information

The family of Claudia Simonton created this Life Tributes page to make it easy to share your memories.

Claudia E. Simonton was called to her heavenly home on May 21,...

Send flowers to the Simonton family.