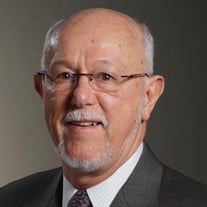 In life we travel many paths, some disastrous and others rewarding. But none can provide complete fulfillment in life. Only because of God’s grace do we have the path of the Gospel to follow. Charles Benney Viseur, at the age of 74 and after an extended battle with pancreatic cancer, completed his journey on Friday, May 6, 2022. He now dwells in the house of the Lord forever. Soli Deo Gloria - To God Alone Be the Glory. Ben is survived by his wife, Janet; brother, James and sister-in-law, Debbie and their two sons, André and Lyles; and by his first wife, Yen, their daughter, Nicole and son, Justin, daughter-in-law, Jenifer, and three granddaughters, Maile, Malia and Milana. Ben and his siblings spent their youth in Taos, New Mexico, and the Four Corners region. His parents were always taking them on road trips, which stimulated Ben’s interest in the geography, history, and culture of the area. This pattern continued when they moved to Scottsdale, Arizona, where Ben graduated from Coronado High School in 1965. Shortly after completing high school, Ben joined the Army and eventually was qualified both as an enlisted and an officer in the U.S. Army Special Forces. He served three consecutive tours with MACV-SOG in Vietnam and a year with the 10th Special Forces Group in Bad Tölz, Germany. After the Army, Ben pursued a career in the oil and gas industry, which satisfied his desire for travel and for working with people in diverse cultural and social environments. During his 42-year career, he worked extensively throughout the world. Ben was a member of Heritage Presbyterian Church (PCA), an active member of the choir, and a supporter of international missions. He was humbled by the love shown to him and his wife through the prayers and support from our congregational family and from close friends during his period of illness. A funeral service will be held on Monday, May 16, 2022, at Heritage Presbyterian Church, 14500 N. Western Avenue, Edmond, OK 73013. The service will commence at 10 a.m. Interment will take place at 2 p.m. at the Fort Sill National Cemetery, located at 2648 NE Jake Dunn Road, Elgin, Oklahoma, five miles north of Lawton, Oklahoma. *Services will be made available via livestream here on Charle's tribute page, just prior to services beginning, Monday morning. * https://www.heritagepca.org/livestream In lieu of flowers, the family asks that you please consider making a memorial donation to the American Cancer Society in memory of Ben Viseur. Information to make a donation may be found below. https://donate3.cancer.org/?campaign=honormemorialpage&giftType=hon

In life we travel many paths, some disastrous and others rewarding. But none can provide complete fulfillment in life. Only because of God&#8217;s grace do we have the path of the Gospel to follow. Charles Benney Viseur, at the age of 74... View Obituary & Service Information

The family of Charles Benney Viseur created this Life Tributes page to make it easy to share your memories.

In life we travel many paths, some disastrous and others rewarding....

Send flowers to the Viseur family.