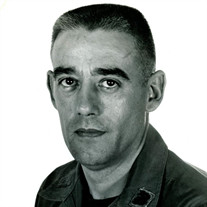 Charles Moore passed away peacefully surrounded by his loving wife and family Tuesday night, March 17, 2020. Charles was born in Clarksburg, West Virginia on March 15th, 1933 to Forest and Mildred Moore. He attended Otto Eldred High School in McKean County, Pennsylvania where he met his future wife, Barbara Junne Shirey. Charles joined the US Navy in 1950 and served four years. Charles married his wife of 68 years, Barbara Shirey, in 1951 and they became partners for life. Charles joined the US Army 1955 and served until 1972 reaching the rank of Chief Warrant Officer prior to his retirement. Charles served in Korea and Vietnam during his military career and he was awarded The Bronze Star Medal after his first tour in Vietnam and was awarded The Army Commendation Medal, after his second tour in Vietnam. Charles loved to travel and see the world which the military allowed him to do. He also felt the need to serve his country and make a difference in the lives of his fellow soldiers. Charles was employed for twenty years at United Parcel Service in Oklahoma City where he retired in 1995. Charles loved being outdoors, riding motorcycles, working on cars, traveling to visit family, and watching his children and grandchildren play sports. Charles was preceded in death by his parents, Forest and Mildred Moore and his daughter Debbie Smith. Charles is survived by his wife Barbara; daughters, Terri Guerra and her husband Rudy; Wendy Moore; son’s Charles Moore, Jr.; Forest “Buzz” Moore and his wife Tina; sisters Doris Wilcox; Carol Greely; and brother Dorsey Moore and his wife Madeline. Charles has seven grandchildren: Shelly, Shannon, Stacy, Amelia, Chase, Trevor, Meagan and nine great-grandchildren. A private funeral service to remember and celebrate Charles’s life will be held at Crawford Family Funeral Service in Edmond, OK on Friday, March 27, 2020 at 11:00 a.m., burial will follow at Gracelawn Cemetery in Edmond, OK. The services for Charles will be made available via webcast for any not able to make it to the services.

The family of Charles Moore created this Life Tributes page to make it easy to share your memories.

Charles Moore passed away peacefully surrounded by his loving...

Send flowers to the Moore family.