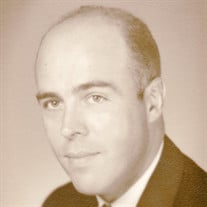 Charles P. (Chiz) Gies passed away peacefully October 21st, 2021, in Edmond, Oklahoma. Charles was born in Chicago, Illinois to Charles Gies and Marie Simons Gies. Growing up on the south side of Chicago, he attended St. Lawrence catholic grade school and graduated from Hirsh High school in 1947. He was hired by the Santa fe Railway Co. For whom his grandfather, Peter Simon, had been an engineer driving the famous Super Chief. Starting in an entry level position, Charles worked in the refrigeration department and had 37 years of loyal service when he retired in a managerial position. During his career he lived in Chicago, San Francisco, and Topeka, Kansas. He married Pat (Keveney) on June 18th, 1949, at St. Joachim Catholic Church and recently celebrated 72 years of marriage this past June. Charles and Pat moved to Lenexa, KS and after his retirement where he sold residential real estate. He loved helping people and helping them find the perfect home. Charles was a life long catholic, loved his faith, and served as an altar boy and a lector as an adult. His hobbies included tennis, golf, water aerobics and bowling. He was an avid bridge player and in recent years was a Rummikub wizard. He was a big fan of the Kansas City Chiefs, the White Sox, Notre Dame and our very own OKC Thunder. He was a master gardener and loved growing flowers and vegetables. Charles was an active member of the Knights of Columbus at St. John the Baptist Catholic Church. Charles is survived by his wife Patricia Keveney Gies, one son Thomas Gies and his wife Lucy, daughter Julie Gies Woner and her husband Kent, 5 grandchildren: Sarah Raff Newby, Michael Raff, Charles Woner, Betsy Gies, and Emily Woner Brink. Great Grandchildren: Austin Newby, Payne Raff, Oliver Raff, Kate Newby, Finley Raff and Pierce Woner. Charles was preceded in death by his daughter, Kathy Gies Raff and his parents Charles and Marie Gies. Charles loved his family dearly and would tell everyone how proud he was of them. In lieu of flowers, donations can be made to the Knights of Columbus Council 6447 at St. John the Baptist, PO Box 510, Edmond Ok 73083. https://www.kofc.org/secure/en/donate/covid19-reponse.html A funeral mass is scheduled for Tuesday, November 2nd at 10:00 AM at St. John the Baptist Catholic Church.

The family of Charles Peter Gies created this Life Tributes page to make it easy to share your memories.

Send flowers to the Gies family.