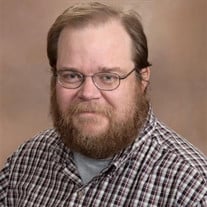 Charles Edward (Chuck) Nusbaum was born on May 15, 1974 and passed from this life to be with our Lord on April 5, 2019 at the age of 44. Chuck is survived by his wife, Rose, and their three sons, Erik (17), Edward (14) and Elijah (11). He is also survived by his parents, Paul & Dwan Nusbaum of Claremore, OK; by his brother, Chris Nusbaum and wife Danielle of Oklahoma City; and by numerous aunts, uncles, nieces, nephews and cousins. He is preceded in death by this grandparents, Jack & Mary Nusbaum, Betty Nusbaum, and Myron & Mozelle Maddox. Born and raised in Oklahoma City, Chuck attended John Marshall H.S. for 2 years and was selected to be a part of the inaugural class of the Oklahoma School of Science and Mathematics – graduating with a group of 44 seniors in 1992. He also earned the distinction of being a National Merit Scholar. He attended Oklahoma Christian University where he earned a Bachelor of Science in Mechanical Engineering. It was there he met his wife, Rose, and they were married on April 29, 1995. Chuck worked as a programmer at Tinker Air Force Base for many years and enjoyed programming for the B2 Bomber, especially when he got to use the flight simulator. In 2013, Chuck began programming for Paycom, where he was blessed to work with his brother Chris. Chuck enjoyed reading, painting, and playing games of all kinds with his family and friends. Friday night game nights were the highlight of his week. He also enjoyed being able to assist anyone who needed help with computer problems, or finances, or anything else; and would willingly lend an ear to someone who needed to talk. Chuck’s greatest passion was for serving the Lord. He always dreamed of being an elder at Wilshire; following in the footsteps of his grandfathers, Myron and Jack, and his father, Paul. While that dream was not realized, he was able to serve as a Deacon for many years, and he regularly taught adult Bible classes (co-teaching with Ryan Newell in the discussion class was a favorite). Chuck loved having conversations with his sons and was very proud when they were baptized into Christ. Chuck touched, and was touched by, many hearts during his life with us. While he could appear quiet or shy to some, his presence, quick wit and boisterous laughter could light up a room. He would be uncomfortable when someone (especially his parents) bragged on his accomplishments or the brilliance he demonstrated in nearly everything he put his mind to do. A fierce competitor, a gentle giant, a deep thinker, a thoughtful and compassionate soul – we may think of him as ‘our Chuck’, but he was always God’s man. In lieu of flowers, donations may be made to In Search of the Lord's Way (www.searchtv.org), or to Hope Harbor Children's Home (www.hopeharborinc.org) Claremore OK.

The family of Charles "Chuck" Nusbaum created this Life Tributes page to make it easy to share your memories.

Send flowers to the Nusbaum family.