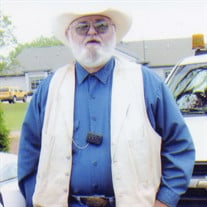 Cecil Wayne “Hoss” Russell was born August 18, 1946 in Muskogee, OK to Cecil Odell and Dorothy Jane (Adams) Russell. He went to his heavenly home on October 24, 2018. After graduating from Muskogee High School, he attended NE State University in Tahlequah, OK, for two years, where he faithfully studied “Campusology”. From there he worked for a supply company in Muskogee, OK. When a better opportunity from the Oklahoma Department of Transportation came around, he started surveying highway rights-of-ways and worked his way up to inspector. When Wayne figured he had everything he needed, along came Flossie Lou Wells, and changed his whole outlook. It took Wayne a whole year to talk Flossie into the rest of his life. They were united in marriage on April 7, 1973. They lived in Muskogee for a year after marriage and later relocated to Deer Creek, OK. While there, he helped with the family farm and continued to do so, until his retirement in 2008. Wayne and Flossie had a son, Justin, whom they faithfully followed and supported in all his adventures. From baseball, stock shows and rodeos, Wayne and Flossie were a fixture in all aspects. Wayne was preceded in death by his parents. He is survived by his wife, Flossie, son Justin and wife Jessica, and their two children, Taylor and Loclynne of Lipscomb, TX; his sister Doris Watson and husband Mike of Broken Arrow, OK; nephew Jeremy, his wife Tracy and their children, Quinton and Caroline of Collinsville, OK, along with many nieces and nephews. Wayne was loved by all friends and family alike. A funeral service to honor and celebrate Wayne will be held Monday, October 29, 2018, at 10:00AM, at Seward Road Baptist Church in Guthrie (Seward), OK. Come-and-go visitation will be held at Crawford Family Funeral Home in Edmond, OK, on Saturday, October 27, 2018, from 12:00-8:00PM, with family being present from 3:00-5:00PM. Visitation will contiune the following day, Sunday, October 28, 2018, from 1:00-6:00PM. Burial will take place following services Monday, in Seward Cemetery.

The family of Cecil Wayne "Hoss" Russell created this Life Tributes page to make it easy to share your memories.

Send flowers to the Russell family.