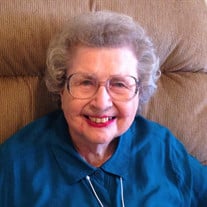 Caroline Woodside Mock died peacefully in Oklahoma City during the early morning of 10/20/2018.She was born on 6/15/1922 in Spartanburg, South Carolina. Her parents were James Woodside Williams and Esther Lander Williams. She grew up in South Carolina with them and her brother Jim Williams, deceased, and her sister Lila Williams Long. Caroline graduated from Winthrop College in Rock Hill, S.C. At that time young men from the Army/Air base located next to the campus would sit on a wall around the campus to look at the pretty girls. One handsome young soldier from Ft. Smith, Arkansas asked to meet Caroline and the rest is history. Caroline and Alfred B. Mock were married in 1943 and were blessed with over 70 years together. During their early marriage they lived in several states. They settled in Ft. Smith where Fred joined his father in his insurance agency. They built a home and lived there until Fred’s death in 2014. Caroline worked briefly after college in Washington D.C. as a code breaker during World War 2. After her marriage she did not work outside of the home, and enjoyed being a full-time wife and mother to their 4 children. She was an excellent bridge player and had wonderful long-term friends in their bridge club. In her 50s she starting building large wooden doll houses. She loved decorating and these houses were beautifully decorated and furnished. She and Fred loved to dance and listen to music. They also loved to travel and when Fred retired early they spent years traveling in their motor home. Nova Scotia was one favorite destination, but most of all they loved to go to the beach. They regularly stayed for a month at a time in the Pensacola Fl. area and later Gulf Shores AL. The beach was definitely Caroline’s favorite place on earth. Caroline is survived by her 4 children: Fred Mock (Jerri Ann) of Conway AR; Carol Anne Rakosky (Deacon Jerry) of Edmond OK; Harry Mock (Michele) of Fayetteville AR; and Jim Mock (Barbara) of Edmond OK. She enjoyed her children very much and was so proud of her 11 grand-children and 12 great grand-children. She is also survived by her sister Lila Long, Greenville SC and sister-in-law Dot Williams, Lander WY. and 12 nieces and nephews. After Fred’s death, Caroline moved to Oklahoma City where she lived happily at Brookdale Village for 4 ½ years. Thankfully she was able to read her favorite books even in her last days. Her Mass of Christian burial will be Nov.9th in Ft. Smith AR. at 11:00am at Christ the King church. Crawford Funeral Home in Edmond, OK is assisting with services.

Caroline Woodside Mock died peacefully in Oklahoma City during the early morning of 10/20/2018.She was born on 6/15/1922 in Spartanburg, South Carolina. Her parents were James Woodside Williams and Esther Lander Williams. She grew up in South... View Obituary & Service Information

The family of Caroline W. Mock created this Life Tributes page to make it easy to share your memories.

Send flowers to the Mock family.