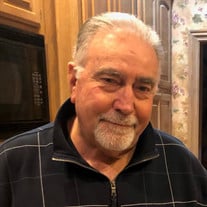 On Tuesday morning, February 2, 2021, Carl woke up, fixed his coffee, went out on the back deck overlooking beautiful Lake Texoma – the place he called his “happy place” where he would have his quiet time with the Lord each morning. He then went back inside the house, sat down in his favorite chair and with his coffee and Bible on the table beside him, he heard the Lord say “Son, you have done well, and you have trusted in the One Who loves you so dearly. It is time to come be with Me.” And with his last breath, Carl peacefully ran into the arms of the One Who gave His life for him and Carl looked into eyes of such Love that he had only imagined and began his next great adventure. Carl Catania (Carl Anthony Joseph Catania) was born to Phyliss and John Baptiste Catania, January 13, 1943 in Baton Rouge, Louisiana. Carl graduated from Baton Rouge High School in 1961. He was an alumnus of LSU where he was also a member of ROTC. Geaux Tigers! Carl married Linda Durr on September 5, 1964. They married when Linda was 18 and Carl was 21 and for 56 years continued their romance. It was love at first sight when Linda, working at Walgreens in Baton Rouge, saw a handsome Italian come to the soda fountain wearing a striking Pinstripe suit accompanied by a girl on each arm. Carl began to frequent the soda fountain and Linda’s work breaks would miraculously occur at Carl’s visits. It became serious when the two double dated but with different dates. Carl was driving and asked Linda’s date to drive as his “back was hurting”. Carl then got in the back seat with Linda and before the trip ended they were holding hands. In 1963 Carl began his 56-year career in insurance. A man of integrity, Carl was trusted by his clients, always looking to their best interests. Involved in many civic activities, Carl was President of AMBUCS, a member of the NRA, the Safari Club and his industry association. He loved helping many philanthropic causes including Bethel Foundation, Amtryke, and Arise Ministries. Carl was an avid sportsman traveling throughout the world to pursue his hobbies of hunting and fishing. So many friends accompanied Carl on these trips and lifelong and treasured relationships were established. His most famous outing was the accidental shooting of his best friend, Bill Smith and the funny stories of buck shot removal. Carl loved God and he loved his country. Carl is survived by his loving wife Linda Durr Catania, one sister, Mae Wethey of Baton Rouge and numerous nieces and nephews. Carl’s love of family will live on through his son Todd Catania and wife Skyler; his daughter Dana Thomas and husband Joe and eight grandchildren: Kinley Catania Taylor and husband Mike of Seattle Washington; Kaden Catania of Frisco, Colorado; Roma Catania of Plano, Texas; Keziah Catania of Edmond, Oklahoma; Khloe Catania of Edmond, Oklahoma; Cruz Catania of Edmond, Oklahoma; Presley Catania of Edmond, Oklahoma; and Carlie Thomas of Edmond, Oklahoma. Carl is also survived by his always faithful sidekick – his dog Casey. Charitable contributions may be made in Carl’s name to Oklahoma Christian School Foundation, Arise Ministries, and Bethel Foundation. A memorial service will be held to remember and celebrate Carl's life on Monday, February 8, 2021 at 2:00PM at Life.Church Edmond (4600 E 2nd St, Edmond, OK 73034). Services will be made available via livestream here on Carl's tribute page, or on Crawford Family Funeral Service's Facebook page, just prior to services beginning. A link for viewing may be found below. https://www.facebook.com/crawfordfuneral/

On Tuesday morning, February 2, 2021, Carl woke up, fixed his coffee, went out on the back deck overlooking beautiful Lake Texoma &#8211; the place he called his &#8220;happy place&#8221; where he would have his quiet time with the Lord each... View Obituary & Service Information

The family of Carl Catania created this Life Tributes page to make it easy to share your memories.

Send flowers to the Catania family.