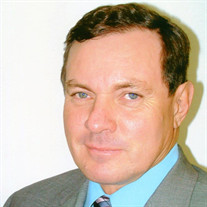 A come-and-go viewing and visitation will be from 1-8pm on Tuesday, September 14th at Crawford Family Funeral Service, Edmond. A service celebrating his life will be at 2pm on Wednesday, September 15th at Crawford Funeral Service with burial following at Kansas Cemetery, Piedmont. Bruce Maxie Hardy, 70 years old, went to be with his Lord and Savior, Jesus Christ on September 12, 2021 in Oklahoma City surrounded by his loved ones. Max suffered a stroke in 2020 but persevered and his faith in God stood strong as he overcame many battles. Max was recently diagnosed with AML Leukemia, which progressed rapidly in his final days. Max was born on June 29, 1951 in Lamar Colorado, to Olen and Mary June Hardy. Max grew up and attended high school in Walsh Colorado where he played basketball, football, baseball and ran track. He went on to Panhandle State University and graduated in 1975 with a business degree. Following college, Max graduated from The University of New Mexico School of Banking in 1985 where he received the highest score on the banking test that the school had ever had. While in high school he met his wife Tara. They were married on June 28, 1970. Together they raised their four children Bobbi, Courtney, Brock, and Brett. Max spent his life working in the propane industry. There was nothing Max loved more than watching his grandkids in all of their endeavors. Between the nine grandkids, his weekends were packed full, yet Max rarely missed a game, event, or activity. They all knew they could look in the stands and grandad would be there cheering them on and waiting for them after. Max had a true love for the water. He instilled this in his kids with their many trips to Lake of the Ozarks and in his grandkids as they spent their summers at Table Rock Lake. Nothing brought him joy like kayaking, fishing, and early morning boat rides around Table Rock Lake with his kids, grandkids, family and anyone else that was there. Max’s faith in God was unwavering. He led his family with love and passion leaving a legacy of endurance and faith in Jesus. Max is survived by his wife Tara Hardy; siblings Barbara Cogburn and husband Arden (of Walsh, Colorado), Ronnie Hardy and wife Carolyn (of Estes Park, Colorado), Brenda Hargrove and husband Richard (of Walsh, Colorado); daughters Bobbi Heath of Edmond, Oklahoma, Courtney Shettron and husband Trevor of Edmond, Oklahoma; sons Brock Hardy and wife Janea of Piedmont, Oklahoma and Brett Hardy and wife Madelinn of Edmond, Oklahoma. Grandchildren, JoBi Heath, Kamri Heath; Kasidi Hardy, Bo Hardy, Brogan Hardy; Tabry Shettron, Talyn Shettron, Trace Shettron; LeiLinn Hardy. Max is preceded in death by parents Olen and Mary June Hardy, sister Janice Mckinley and niece Darla Cogburn. In lieu of flowers, donations can be made to the Deaconess Pregnancy and Adoption Center of Oklahoma City in memorial of Max Hardy.

The family of Bruce "Max" Hardy created this Life Tributes page to make it easy to share your memories.

A come-and-go viewing and visitation will be from 1-8pm on Tuesday,...

Send flowers to the Hardy family.