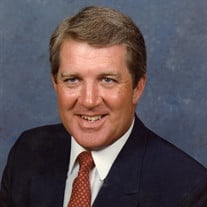 Bobbie Charles “Bob” Alexander, 74, of Edmond, OK, went to be with his Lord and Savior May 9, 2019. He was born on January 15, 1945 in Amarillo, Texas to Charles Andrew & Lois Mae Alexander. He graduated from Hugoton High School in 1963 where he met and later married Sheryl Rae Gooch. Bob was a star athlete lettering in football, basketball, baseball and track. He continued on playing football at Coffeyville Community College and also played minor league baseball. Bob began his career working at a finance company in Liberal Kansas and progressed into banking. In his mid-thirties, he was promoted to president at Bank of the Southwest in Dodge City, Kansas and later served as president of Canadian State Bank in Yukon and Home State Bank in Hobart. Bob finished his banking career in 2008 retiring as president of BancFirst in Hobart. After retiring he and Sheryl relocated to Edmond to be closer to their children and grandkids. Bob was proud of his career achievements but that was overshadowed by the lifelong friends and relationships that were created along the way. He enjoyed golfing, fishing, and perhaps above all else time with his family and friends. Bob’s devotion to his family was most evident while being the primary caregiver for Sheryl during her 6-year battle with cancer. Bob is survived by his brother, Ronnie Alexander and wife Bonnie; sons, Chris Alexander; Ryan Alexander and wife Rayna; daughter, Tresha Wilson and husband Keith; as well as his grandchildren, Maybree, Jackson, Preslee, Garret, Ava, Braden, Ashlyn, and Landon. A service honoring Bob’s life will be at 2:00pm on Tuesday, May 14th at Crawford Family Funeral Service, Edmond. Burial will follow at Gracelawn Cemetery in Edmond.

The family of Bob C. Alexander created this Life Tributes page to make it easy to share your memories.

Send flowers to the Alexander family.