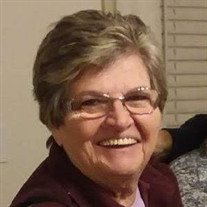 A service celebrating Beverly's life will be at 1pm on Tuesday, February 23rd at Crawford Family Funeral Service, Edmond. Burial will follow at Resthaven Memory Gardens in Oklahoma City. The service will be streamed live through this tribute page. Beverly Owens, 82, beloved Wife, Mother, and Grandmother, was called to her be with her Lord and Savior on February 17, 2021. She entered this world on November 16, 1938 in McAlester, OK, born to James and Pauline Hillis. She was a graduate of Capitol Hill High School in 1958, where she met her husband of 62 years Clifton Jake Owens.   Throughout her life she took great pride in her work as Court Clerk, Dispatcher, and first female Officer as a Deputy Sheriff and Administrative Sergeant at that time for the City of Mustang. After the City of Mustang she worked at Dayton Tire, along with finishing her working years as an Aircraft Fuels Dispatcher at Tinker Air Force Base.  Ultimately, her most cherished position in life was being a Wife, Mother, Grandma, and Aunt. Caring for her family was her favorite activity. Anytime she could make your favorite meal, host a party or holiday, or spoil you in any way, brought her the greatest joy. Her home was not only open to her family, it was open to anyone and everyone. She never knew a stranger. If a friend or coworker tagged along, her door was always open. She would send you home with a full belly, leftovers, and groceries; then tell you to come again.  Her legacy is her family; her children, grandchildren, great-grandchildren, nieces, and nephews. We will carry on her memory and honor her legacy by telling her stories, singing her lullabies, cooking her best dinners, continuing to spend time together as a family, opening our hearts and homes to those in need, and ultimately loving beyond measure.   Beverly was met at the gates of Heaven by her Mother and Father, James and Pauline Hillis; her Sister Helen Sanders; Grandson Walker Wyatt George, Mother-in-Law Iva Livingston, and other family and friends she loved. She will be greatly missed by her Husband Clifton (CJ) Owens; Brother Jimmy Hillis and Wife Donna; Daughters Karla Barron and Rhonda Fletcher and Husband Grant; Granddaughters Haven George, Kassidy Burks and Husband Glennie; Grandsons Jaxon Barron and Sammy "Little Bear" Fletcher; Great-Granddaughters Heritage and Jozie Burks; Family of Cindy Rushing, Family of Bobby and Melanie Sanders, Family of Chad and Chandie Sanders, Family of Paula and Alan Heard, Family of David and Crystal Hillis, and Family of Richard and Amy Hillis, Family of Megan Ray, along with so many others that she considered family.

A service celebrating Beverly's life will be at 1pm on Tuesday, February 23rd at Crawford Family Funeral Service, Edmond. Burial will follow at Resthaven Memory Gardens in Oklahoma City. The service will be streamed live through this tribute... View Obituary & Service Information

The family of Beverly Owens created this Life Tributes page to make it easy to share your memories.

A service celebrating Beverly&#39;s life will be at 1pm on Tuesday,...

Send flowers to the Owens family.