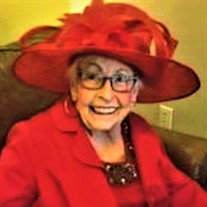 Beverly June Georgia was born April 2, 1934 at a ranch in Roger Mills county Oklahoma. She would be raised on a family farm near Roll. She would attend school in Roll and graduate from Crawford High School. She attended Oklahoma A&M and married her college sweetheart, Bob Graham in June 1955. They were awarded their undergraduate degrees together in June 1956. The couple would eventually settle in Houston, Texas. She was a homemaker who raised two children: Robert, born July 1956 and Sandra, born March 1960. Bob would pass on in May 1971. In November 1971, she married Roy F. Georgia and relocated to Del City, Oklahoma. Their son, Roy M. Georgia, was born in January 1973. She would work in real estate, home health care and substitute teaching. The couple was divorced in July 1994. Her home in Del City was destroyed by a tornado in May 1999 and she moved to a condominium in Oklahoma City. When her health began to deteriorate, she moved to the nearby Quail Ridge Senior Living facility. She died on February 26, 2021 surrounded by her family. She was preceded in death by her Parents, Claude and Lois Hubbard, and brother Harold Hubbard. She is survived by her sister, Barbara Allee; her brother, Johnny Hubbard; her three children, six grandchildren and two great-grandchildren. A memorial service to remember and celebrate Beverly's life will be held Tuesday, March 2, 2021, at 10:00AM at Crawford Family Funeral Service in Edmond, OK. Services will be made available via livestream, here on Beverly's tribute page, just prior to services beginning. Please check back soon for a full obituary, once made available. A private family burial will take place on a later date, at Silent Home Cemetery outside of Roll, OK. In lieu of flowers the family asks that you please consider making a donation, in memory of Beverly, to NAMI (the National Alliance on Mental Illness of Oklahoma). Information for making a donation may be found below. https://www.namioklahoma.org/donate https://secure.qgiv.com/for/namokl

Beverly June Georgia was born April 2, 1934 at a ranch in Roger Mills county Oklahoma. She would be raised on a family farm near Roll. She would attend school in Roll and graduate from Crawford High School. She attended Oklahoma A&M and married... View Obituary & Service Information

The family of Beverly Georgia created this Life Tributes page to make it easy to share your memories.