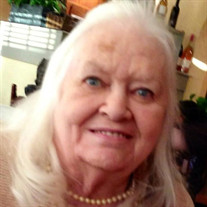 Bettye Elenor (Hughes) Jones, 88 years old, lost her battle from complications with COVID-19 on September 6, 2020 in Oklahoma City, OK. Bettye was born January 2, 1932 to Dorothy and Marvin Hughes in Tulsa, Oklahoma. She grew up in Sand Springs and attended Charles Page High School. She married Don Jones in 1947 and they had four children. In the 1950s Bettye began working in fashion via clothing, shoe stores, and jewelry sales. She spent several years as a branch manager for Sarah Coventry, managing and training her own team. As a young bride and mother, she felt the call of God on her life while wondering how God could possibly use her in her situation. She began putting one foot in front of the other trusting God to lead. She began following God in her local church, Glenwood Baptist Church, teaching and serving children as a Sunbeam leader. Bettye continued teaching and training Sunbeam leaders on the state level through the Southern Baptist Convention. Her work with the SBC continued, serving as a house mom, and eventually founding director of Los Ninos, a daycare for Latino families in Bixby. Eventually moving to Oklahoma City, she was the Assistant Director of the Baptist Mission Center serving the Hispanic community through various programs including the medical clinic. She became involved in the coalition to combat hunger and Catholic Charities aiding Vietnamese refugees. In the 1980s Bettye moved to Garland, TX. Bettye immediately plugged in to Church on the Rock in Rockwall, TX. She began the Hospitality Ministry at Church on the Rock serving and training a team to continue and expand the ministry. The church was growing so fast and the children’s program was exploding without focused leadership. Bettye created written curriculum and began training their new leaders. Always teaching and training, she became the Touch Pastor over the Ladies Ministry at Church on the Rock. She worked at The Contract Lens Center helping patients and training new lens wearers. Bettye later worked as the manager of PetMobile where she grew, trained, and expanded the business. After suffering many health issues in Texas, she moved back to Oklahoma City in 2000 to be near family and underwent 8 surgeries at Deaconess Hospital. During her time as a patient, Bettye developed strong relationships with the hospital staff. She decided to minister to patients and staff as a volunteer Chaplain. She is proceeded in death by both of her parents; her sister, Janet Marie Hughes; her brother, Charles Hughes; and her son, Larry Don Jones. Bettye leaves behind her younger brother Jerry Allen Hughes of Denton, TX; her daughter, Donna Broughton and husband, Jerry Broughton of Edmond, OK; son, Marvin Jones of Ketchum, OK; and daughter, Dorothy McGuire of Denton, TX. She leaves behind 4 grandchildren, 5 great grandchildren, and 2 great great grandchildren: Jerry Broughton, wife Michelle and children JD and Carlee; Natalie Bratton, husband Chad and daughter Alayna of Edmond, OK; Mindy Bridges, husband James and children Miranda and Champ of Choteau, OK; and Cortlyn Jones of Arlington, TX. Miranda Bridges has 2 children, Keagan and Kennedy. Come-and-go visitation for Bettye will be held on Tuesday, September 22, 2020 from 2 p.m. until 8 p.m. at Crawford Family Funeral Service, 610 NW 178th St. Edmond, OK 73012 and on Wednesday, September 23 from 9 a.m. until 10 p.m. Graveside services will be held on Wednesday, September 23 at 11 a.m. at Gracelawn Cemetery in Edmond, OK. Bettye never doubted God’s love for her and His call on her life. I'm sure when Bettye reached those pearly gates, she was overwhelmed to have finally made it home.

The family of Bettye Elenor Jones created this Life Tributes page to make it easy to share your memories.