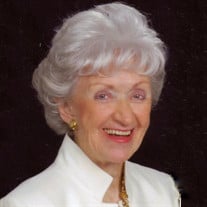 Betty L. Head was born in Los Angeles, California on November 20, 1924 to William H. and Cora Lee Still. Her parents moved to Tulsa, Oklahoma when Betty was a toddler. She attended Tulsa Public Schools and graduated from Tulsa High School, including Tulsa University, where she majored in business and was a member of the Phi Mu Social Sorority. Her dad was transferred to Oklahoma City and Betty joined her family in OKC after working a year for Gulf Oil Corporation in Tulsa. In Oklahoma City, she was Executive Secretary at Sohio Petroleum Company, working for the Vice President of Sohio and Standard Oil Company of Ohio. She married James A. Loomer who predeceased her in 1991. They had two children, Lisa Curtess Welch and Terri Lynn Seaton. Betty had a full and eventful life raising 2 girls and working full time as her husband Jim’s legal secretary. While raising her girls Betty infused Christ into their lives by having them participate in Child Evangelism Fellowship on a weekly basis. These activities included weekly memorizations of bible verses. This instilled the Word of God in her girls at a young age. In her younger years God and health were on her fore front. Betty was constantly searching for knowledge and the healthiest way to live. She always seemed to be ahead of the curve regarding health. She raised her girls as vegetarians and prided herself on being a health minister. In 1993 the fun began. She married Charles P. Head. As her girls were raised, she could now kick up her heels. Betty and Charles were able to travel extensively for several years. They explored most of the 50 states and many countries oversea. Betty was a photography bug and took many pictures of her travels. She would then turn these into note cards for others to enjoy. Her artistic side came out and she was able to take up oil painting. Her family has enjoyed the fruits of her labor with the paintings in the house Included in her artistic side was her ability to beautifully play the piano. It was a pleasure to sit and listen. Betty and Charles enjoyed gardening and cooking. Their friends and family enjoyed the abundance of their garden. Betty has been active in several Baptist churches thru the years. Most recently Quail Springs Baptist and Fairview Baptist. She always jumped into the social scene as part of her gifts were inclusion of others and hosting. She would organize mixers/dinner groups to allow for fellowship within her Sunday school class. When health no longer allowed Betty to travel, she became involved in the traveling ministers of Henderson Hills who blessed the Veraden. This was much appreciated as faith and Jesus were such a part of Betty’s core. Betty and Charles also kept up to date and an accurate pulse on politics. In fact, she was displeased when she learned her new son in law was in face a Democrat. All in all, Betty Lou Loomer Head lead a fruitful and productive 94 years. She will leave a void in many people’s heart. I am confident however she has already heard “well done my good and faithful servant” Betty is survived by her husband Charles P. Head; her two daughters, Lisa Curtess Welch and Terri Lynn and husband Brian Seaton; granddaughters, Ashley, Lexi, Abbi and Reese; Charles’ three children, Judy and husband Don Price; James Head and wife, Brenda; and Janet and husband, Rob Bargewell; Charles’ family also includes five grandchildren and six greatgrandchildren. Come-and-go visitation for Betty will be held on Friday, July 12, 2019 from noon to 8 p.m. with the family to receive friends from 6 to 8 p.m. at Crawford Funeral Service, Edmond, OK. Funeral services will be held on Saturday, at 2 p.m. at the funeral home chapel with burial to follow at Rose Hill Burial Park, Oklahoma City. In lieu of flowers, Betty has designated the Gideons Organization, P.O. Box 1944, Edmond, OK 73083 or Child Evangelism Fellowship of Oklahoma, P.O. Bo 462, Sulphur, OK 73086.

Betty L. Head was born in Los Angeles, California on November 20, 1924 to William H. and Cora Lee Still. Her parents moved to Tulsa, Oklahoma when Betty was a toddler. She attended Tulsa Public Schools and graduated from Tulsa High School, including... View Obituary & Service Information

The family of Betty L. Head created this Life Tributes page to make it easy to share your memories.

Send flowers to the Head family.