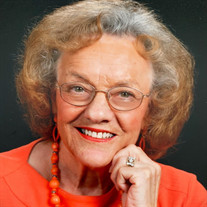 Barbara Lee Weatherford was born on March 1, 1936 in Pauls Valley, OK to Cecil H. and Ethel (Yoakum) Robison. She passed away at her residence in Edmond, OK on March 3, 2019. Barbara, known as “Ganny” to her grandkids, was a lovely woman inside and out. She was poised, quick-witted, compassionate, and intelligent. She was a fierce advocate for her family and her family was her number one priority. She showed never ending love, support and dedication to them. Barbara attended Pauls Valley Schools throughout her school years, graduating from PV High. She was proud to be a PV Panther! Early on in her career, Barbara worked as a secretary for several different businesses. She left Oklahoma and moved with her family to Georgia and Ohio. While in those states, she continued to help support her family and helped her husband, J.W., pursue his Doctor of Philosophy degree at The Ohio State University. She often referred to this assistance as putting “my husband through the third degree”. Her sense of humor was always present and most often accompanied by loving heartfelt laughter. Upon returning to Oklahoma in 1972, she worked in the real estate industry, both as a realtor and home guaranty sales person. She enjoyed cooking (Christmas cherry mashes and buckeyes were the family favorites), singing, dancing, playing bridge with friends, working in the garden, and spending time with family. She took great delight hiding behind doors and scaring the daylights out of anyone. She was a faithful member of The First Baptist Church of Edmond and loved Jesus Christ as her personal Savior. She would often recite verses by memory and she could be heard singing gospel songs (“I’ll Fly Away”, “Glory Land” and “Amazing Grace” were her favorites) throughout each day. She leaves behind her husband of 66 years, John W. “J.W.” Weatherford; son, Michael W. “Mike” Weatherford and wife, Stephanie; daughter-in-law Lynn Weatherford; grandchildren: Megan Elizabeth Roberts, Daniel Scott Roberts and wife Shelby, Rachel Lee Branch and husband Chad, Andrew Michael Weatherford and wife Haley, Jacob Nolan Weatherford and fiancé Shelbie; 2 great-grandchildren as well as many nieces and nephews. She is preceded in death by her parents, daughter, Diana Sue Roberts and siblings, Judy Davis, Norma Shugart and Cecil Robison. The family of Barbara will be receiving friends on Wednesday, March 6, 2019, from 5 to 7 p.m. at Crawford Funeral Service, Edmond, OK. Services celebrating the life of Barbara will be held on Thursday, March 7, 2019 at 1 p.m. at Edmond’s First Baptist Church, 1300 E 33rd St, Edmond, OK 73013, with burial to proceed to Memorial Park Cemetery in Oklahoma City, OK. Memorial donations in honor of Barbara can be made out to the Alzheimer’s Association of Oklahoma, 6601 Broadway Ext Suite 120, Oklahoma City, OK 73116.

The family of Barbara Lee Weatherford created this Life Tributes page to make it easy to share your memories.

Send flowers to the Weatherford family.