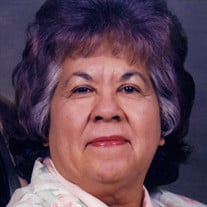 Amelia Vasquez Osterdyk, born May 5, 1935 to Cleto Vasquez and Lorenza Serbin Vasquez in San Angelo, TX. She is survived by her husband of fifteen years, Casey Osterdyk, his children, Scott and his wife Brenda Osterdyk of Puerto Rico, Kirk and his wife Connie Osterdyk of Billings, MT, daughter Jolynn and her husband Jim Fellows of Billings, MT and all the Osterdyk grandchildren, her son Gary and his wife Michelle Harris of Edmond, OK, her brother George Vasquez of Stockton, CA, and sister Nellie Ditto of Santa Clara, CA, sister-in-law Juanita Vasquez, of San Mateo, CA, sister-in-law, Betty Vasquez, Mountain View, CA, brother-in-law Harold Wayne Blaylock, of Ft. Smith, AR, sister-in-law, Shirley Lynch, of Muldrow, OK, and many nieces and nephews. Amelia was married to Robert L. Harris for forty-six years, until his death March 3, 2001. Amelia wore many hats in her lifetime: Aunt, Robert L’s wife, Gary’s mother, Lead Lady, she did not have her own name for years, even when they had the car lot, mostly she was Robert L’s wife. If you were to ask her what job she loved the most, she would tell you it was when she held a position with Raytheon in Mountain View, CA, a military contractor, where she was in charge of the electronics division. While she only had a high school diploma, she only answered directly to one engineer and she had many engineers under her. Amelia was asked by a nurse one day, what was her role where she worked? Whether it be at Raytheon, the ranch, or car lot, Amelia replied, “I’m the boss.” She has gone to be with our Lord and Savior Jesus Christ. I miss my mom. There will be a graveside service held to remember and celebrate Amelia's life, Thursday, May 2, 2019, at 10:00AM, at Woodlawn Memorial Park Cemetery, in Ft. Smith, AR.

Amelia Vasquez Osterdyk, born May 5, 1935 to Cleto Vasquez and Lorenza Serbin Vasquez in San Angelo, TX. She is survived by her husband of fifteen years, Casey Osterdyk, his children, Scott and his wife Brenda Osterdyk of Puerto Rico, Kirk and... View Obituary & Service Information

The family of Amelia Serbin Osterdyk created this Life Tributes page to make it easy to share your memories.

Send flowers to the Osterdyk family.