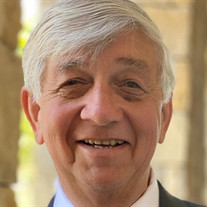 A come-and-go viewing for Mr. Bates will be 9am-8pm at Crawford Family Funeral Service in Edmond on Friday, December 11th. A service celebrating his life will be at 2pm on Saturday, December 12th at Henderson Hills Baptist Church with burial following at Memorial Park Cemetery in Oklahoma City. A live stream of the service will be broadcasted through this tribute page on Saturday. Alvin Raymond Bates saw his Savior’s face and breathes deeply in his presence having finished strong in his battle with COVID on Dec. 8, 2020. Born to Raymond Vernon Bates and Irene Parish Bates Diviney in McKenzie, Tennessee on September 15, 1955, Alvin is preceded in death by his parents. He is survived by his wife of 35 years, Kimberly Kyle Bates as well as his four daughters: Gefi Ivey and husband Scott of Franklin, TN; Carly Shoe of Canton, GA; Lucy Bates of Edmond, OK; and Millie Wall and husband Josh of Edmond, OK. He is also survived by his 6 grandchildren: Ryder and Porter Shoe; Ashlynn and Sean Ivey; and Wiley and Lydia River Wall. Alvin was, in his own words, just a “simple Tennessee farm boy”, having grown up in a house without indoor plumbing, a telephone, or many other things that seem to make life easier. He was the third of four siblings, all born seven years apart. He came to trust in the Lord as a child and was baptized in a small farm pond near his church. Alvin’s life was simple and knowingly good until his father died in an accident when Alvin was twelve years old. After struggling several years for direction, he graduated from Greenfield High School in 1973 and cherished those classmates for the rest of his life. Alvin then enrolled as an enlisted man in the US Air Force in 1974 and used that opportunity to go to college. He worked a 40 hour work week with the Air Force and then drove a hundred and ten miles each weekday to attend college at Arkansas State University. He concluded his service in the fall of 1978 after graduating second in his class with his accounting degree. Alvin began his career as a CPA with Peat Marwick in Memphis in December 1978. Desperate for people to move to Oklahoma for the big oil boom, Peat Marwick promoted Alvin and moved him to Oklahoma City in December 1981. They promised to double his salary in OKC, but as Alvin would often later quip, “twice nothing is still nothing.” In 1983, Alvin left Peat Marwick to become a financial watchdog for a Canadian bank whose oil patch loan recovery plan was in OKC. He started night law school at Oklahoma City University in August 1983, finishing his first year at the top of his class. During the summer after his first year of law school, Alvin met who he called his “best earthly blessing”, Kim (or as he always called her “Kimbo”). They were married on July 28th, 1985 in Oklahoma City. Alvin graduated law school in May 1987. Alvin then embarked on a long legal career with his law school classmate Russell Lissuzzo. After many years of practice, he began his entrepreneurial endeavors aided by his legal and accounting wisdom. He began securing real estate for development and he was instrumental in the Creek Bend, Twin Bridges, and Traditions residential additions in Edmond. Alvin’s next undertaking led him to the railroad crosstie industry in the formation of North American Tie and Timber – a leading supplier of railroad ties to the railroads across the continent. He also became a contributing partner to Funds for Learning LLC, specializing in securing E-rate federal funding for schools and libraries. A member of Henderson Hills Baptist Church for 30 years, Alvin served on numerous committees including the management team that oversaw the planning and building of the church’s campus at 15th Street and I-35 in Edmond. He served on numerous domestic and international mission trips, traveling to Mexico, Russia, Kenya, Tanzania, Rwanda, Burundi, Nicaragua, and Syria. He also was a board member of Integris Baptist Medical Center since 2008. Alvin had a passion for feeding people, particularly his “famous” smoked brisket. He enjoyed tailgating and cheering on the Oklahoma State Cowboys at numerous football and basketball games. His wanderlust took him to destinations around the world. Having never met a stranger, he collected the stories of people’s lives by simply asking, “tell me about you.” Everyone saw him as larger than life and very relational. He will always be loved and remembered for his infectious smile, often unsolicited wisdom, and devotion to his family. A come-and-go visitation for family and friends will be held at Crawford Family Funeral Home in Edmond on Friday, December 11, 2020, from 9:00 a.m. to 8:00 p.m. A socially distanced service celebrating the life of Alvin will be at 2 p.m. on Saturday, December 12, 2020, at Henderson Hills Baptist Church, 1200 E I-35 Frontage Road, Edmond, OK. The service will also be available to livestream.

A come-and-go viewing for Mr. Bates will be 9am-8pm at Crawford Family Funeral Service in Edmond on Friday, December 11th. A service celebrating his life will be at 2pm on Saturday, December 12th at Henderson Hills Baptist Church with burial... View Obituary & Service Information

The family of Alvin Raymond Bates created this Life Tributes page to make it easy to share your memories.

A come-and-go viewing for Mr. Bates will be 9am-8pm at Crawford...

Send flowers to the Bates family.