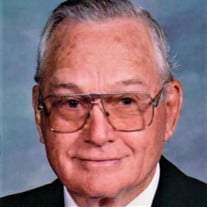 Alven Lavon (Doc) Lawson was born to Andrew Adolphus and Rosie Mae Lawson March 3rd, 1928, at home near Stidham, OK. The family moved to Raiford where Alven attended elementary school, then later attended high school in Eufaula. Following high school graduation in 1946, Alven enlisted in the United States Air Force and was sent to San Antonio. He served in many locations including Okinawa and was honorably discharged from the service while at Shepard Air Force Base, Wichita Falls, TX, in June 1949. He served three years and having earned rank of Sergeant. In the fall of 1949 Alven enrolled at Panhandle University in Goodwill, OK. In 1951 he married Carolyn Rogers of Goodwill. Alven earned a BS in Math with a double minor in Science and Business in 1953. Alven taught math and science for two years at Sharon High School and coached junior high girls’ basketball. The girls only lost one game his second season. In 1955, the family moved to Deer Creek community where Alven again taught high school math and science. He earned a master’s degree in counseling from Central State in 1971 and became and became the Deer Creek High School counselor until 1976. Alven loved his students and they loved and respected him in return. During Alven’s teaching summers, he drove for Greyhound, worked on street and road construction, and was employed as a cattle rancher for Allen Cherry. In 1976 Alven worked full time as a truck driver for TG&Y retiring in 1988. In 1984 Alven married Helen Thomas. They belonged to Territorial Squares Dance Club of Guthrie and the Good Sams’ chapter, Frontier Sams. In 1988 they joined Church of the Servant. They enjoyed wonderfully good times with those friends. Alven is survived by wife Helen, sons: Randy Lawson, wife Timi of Frisco, CO, Dan Lawson, wife Andrea of Lampasas, TX and Dr. Ronnie Lawson, wife Rhonda of Chico, TX. Alven is also survived by his sister Lovella Pattrick of Stillwater and her family, and brother Lester and wife Pat and children of the Kansas City area. Other survivors include Kelly Nix, husband Jimmy of Arcadia and Dr. Craig Thomas, wife Amber of Oklahoma City, fifteen grandchildren and eleven great grandchildren. Alven was a quiet man of God, loved and respected by all who knew him and a teacher of life to all who knew him. Services to remember and celebrate Alven’s life will be held Friday, November 5, 2021, at 11:00AM at Church of the Servant in Oklahoma City. Visitation will be held one hour prior to services. In lieu of flowers, donations can be made to the Paralyzed Veterans of America, PO Box 758589 Topeka, KS 66675 or call 1.800.555.9140 or visit pva.org.

The family of Alven Lawson created this Life Tributes page to make it easy to share your memories.

Send flowers to the Lawson family.