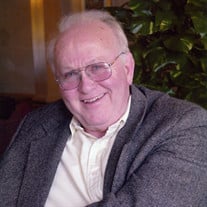 Allen Edmundson, beloved husband, father, brother, uncle, teacher, mentor and friend passed away on December the fifth. Allen was born in Flat River Missouri to the late Allen B. Sr and Mary Elizabeth (Caton) Edmundson. Allen loved his scientific endeavors. He always believed one should work with passion, learn from the great minds around you and listen to common sense espoused by your co-workers, friends, teachers and acquaintances. He rarely sat down without pad and pen to jot down thoughts and ideas. He also loved dogs, teddy bears, basketball and chocolate. He graduated from Dartmouth College with a Bachelor of Arts degree in 1954. He received a two-year medical certificate from Dartmouth Medical School the following year. From 1955 until 1960 he was a doctoral student in protein chemistry under the tutelage of C.H.W. Hirs and the two Nobel Laureates, Stanford Moore and William H. Stein at Rockefeller University. He completed his doctoral studies in 1961 with a Doctorate of Philosophy from Rockefeller University. Allen began his career in 1960 as a postdoctoral fellow of the United States Public Health Service at the medical research Laboratory of Molecular Biology in Cambridge England, under the sponsorship of Sir John C. Kendrew, a Nobel Laureate. He was apparently recruited to that position by Sir Francis Crick. Between 1964 and 1976, he held the titles of Associate Biochemist and later Senior Scientist at Argonne National Laboratory, which is associated with the University of Chicago. From 1976 until 1989, he was professor in the Departments of Biology, Biochemistry and Microbiology, simultaneously, at the University of Utah. In 1990 Allen relocated to Amarillo Texas where he served as the Avery Rush, Jr. chair of Macromolecular Crystallography at the Harrington Cancer Center. Allen retired in 2004 as member and Head of Crystallography from the Oklahoma Medical Research Foundation, Oklahoma City. He had been employed there since 1995. Allen was a pioneer in protein chemistry since the 1950s. He determined the Amino Acid sequence of the Myoglobin Protein and correlated the results with its Three-Dimensional Structure using X-Ray diffraction. His laboratory was also the first to report the crystal structure of a Bence-Jones protein, which was used in devising the first protein test for the human bone cancer Multiple Myeloma. Over the years Allen, and his group of scientists, continued to transfer this knowledge to the fundamental studies of intact human antibodies and their fragments in order to elucidate structural features and the functional properties by which they bind to foreign invaders. Based on his research, Allen published over a hundred peer reviewed articles in scientific journals and popular publications. After the tragic re-entry of the United States Space Shuttle Colombia on February 1st 2003, many newspapers published reports on experiments his laboratory placed on six space shuttle flights including the Colombia. Throughout his life Allen received many honors, awards and grants. For example, the MERIT Award from the National Cancer Institute, Man of The Year Award from the Biographical Institute as well as a Lifetime Achievement Award for his outstanding contributions to Biochemistry and Crystallography from the International Biographical Center. The Journal of Molecular Recognition published a tribute addition to Allen in 2002. One of Allen’s closing statements in that edition read, ”There are few in this life or the next who cherish friends, colleagues, post-docs and students more than I do”. One of his colleagues honored him further by saying, “Truer words were never spoken”. On his numerous trips to the United Kingdom, he always found time to ride the trains with his Brit-Rail pass, visiting the great English cathedrals and churches, especially Saint Paul’s Cathedral and other Wren masterpieces in London. He did not neglect those in the south and west of England, such as the stately Salisbury Cathedral. In lieu of flowers please send donations to an Animal Rescue Organization of your choice or PBS. A memorial service to remember and celebrate Allen’s life will take place at 2:00 p.m. on Saturday, January 16, 2021, at Crawford Funeral Service in Edmond, OK. The service will be made available via livestream.

The family of Allen Broderick Edmundson created this Life Tributes page to make it easy to share your memories.

Send flowers to the Edmundson family.