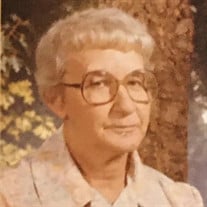 Aldene Johnson of Edmond, Oklahoma, formally of Washington, Illinois, passed away on April 7, 2022, with family by her side. She was born October 10, 1925, to Allen and Ruth Sailor in Wayne City, Illinois. On May 25, 1943, she married T.L. Johnson in St. Louis, Missouri. He preceded her in death in 1984. Her great joy was working at Wilder-Waite School in the cafeteria where she made many lifelong friends. Aldene is survived by her daughter Carolyn Pautler of Edmond, Oklahoma, with whom she made her home. Son, Bob (Dee) Johnson of Edmond, Oklahoma, and sister Brenda (Larry) Howard of Washington, Illinois. Also survived by her grandchildren, Kimberly (Roger) White of Edmond, Keith (DeAnn) Pautler of Edmond, Tina (Gary) Giddens of Grapevine, Texas, Tracy Johnson (Julie Gigowski) of Hurst, Texas, and Chad (Laura) Pullen of Dunlap, Illinois. Aldene had seven great-grandchildren and two great-great-grandchildren. Aldene was preceded in death by her daughter Pat Dixon and son-in-law Byron Dixon of Edmond, Oklahoma, her brother Bob Sailor of Washington, Illinois, sister Betty Payne and nephew Gary Payne of Wayne City, and son-in-law Harvey Pautler of Peoria, Illinois. Services will be held at Deiters Funeral Home in Washington, Illinois. Visitation will begin at 10:00am on Saturday, April 23rd, services will start at 11:00am. Internment will be at the American Mausoleum in Peoria, immediately following the services. In lieu of flowers, donations can be made to St. Jude Runners Checks made payable to St. Jude Runners in Memory of Aldene Johnson Mail To: St. Jude Runners 4722 N. Sheridan Road Peoria, IL 61614

Aldene Johnson of Edmond, Oklahoma, formally of Washington, Illinois, passed away on April 7, 2022, with family by her side. She was born October 10, 1925, to Allen and Ruth Sailor in Wayne City, Illinois. On May 25, 1943, she married T.L.... View Obituary & Service Information

The family of Aldene Johnson created this Life Tributes page to make it easy to share your memories.