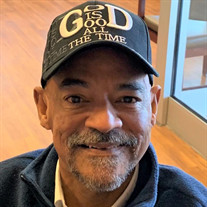 Alberto E. Roubert Sr. passed away peacefully in his sleep on June 27, 2021 in Edmond, OK at the age of fifty-nine years old. Alberto was born on September 13, 1961 in Rio Piedras, Puerto Rico to Cristobal E. Roubert and Maria Hernandez. He was the second oldest of nine children. His passion for music and cycling began at an early age. During his teens he became Junior Champion of Puerto Rico in 1976 in cycling, and at the same time attended the Escuela Libre de Musica in Ponce, Puerto Rico where he played saxophone and enjoyed playing salsa with several different groups. After graduating from Ponce High School in 1979, he desired to attend Berklee College of Music in Boston, but life took him down a different path where he attended the Interamerican University of Puerto Rico, and eventually ended up moving to Oklahoma with his older brother Enrique in 1981. After arriving in Oklahoma, he started attending Primera Iglesia del Nazareno in OKC where he accepted Jesus Christ as his Lord and Savior on Easter Sunday 1982. During that time, he enjoyed spending time with his church family where he developed a passion for missions and using his musical talent to reach others to Christ. Returning to Puerto Rico, he married Brenda Ivette Rivera Perez on June 2, 1983, started a family and decided to move back to OKC in 1985. He began attending Henderson Hills Baptist Church in Edmond, OK where his passion for Christ and sharing the word with others continued to grow. In 1991, he earned a scholarship to attend the Hispanic Baptist Theological Seminary in San Antonio, TX where he would go on to graduate in 1994. Shortly after, Alberto moved to North Carolina with his family and began working for the Baptist State Convention of North Carolina, helping open hispanic churches throughout the state and eventually becoming the pastor for the hispanic mission at Cumberland Baptist Church in Fayetteville, NC. He went on to spread the word of God to thousands of people in his lifetime, leading multiple mission trips in Puerto Rico and preaching at churches throughout North Carolina and Oklahoma for the next several years. He did so all while using his musical talent on the saxophone to bring others to Christ. Alberto was well-loved by his family, friends, and anyone who got to know him. His passion and faithfulness for Christ was shown in his character and will never be forgotten. He had a way of making someone’s day brighter through his humor and kind-hearted spirit, and took pride in considering himself a “people person.” He is survived by and will be dearly missed by his four children, Sarai Roubert, Alberto E. Roubert Jr., Jose A.E. Roubert, and Rut E. Roubert. A funeral service to remember and celebrate Alberto's life will be held at 10:00AM on Friday, July 9, 2021 at Crawford Family Funeral Service in Edmond, OK. A come-and-go visitation will be held throughout the day Thursday, July 8, 2021 from 12:00PM-5:00PM, with a formal visitation with the family of Alberto being present from 5:00PM-7:00PM at Crawford Family Funeral Service. Burial will take place following services on Friday at Memorial Park Cemetery in Oklahoma City, OK. Pastor Sam Marin of Life.Church Edmond will be officiating. Services will be made available via livestream here on Alberto's tribute page, just prior to services beginning.

Alberto E. Roubert Sr. passed away peacefully in his sleep on June 27, 2021 in Edmond, OK at the age of fifty-nine years old. Alberto was born on September 13, 1961 in Rio Piedras, Puerto Rico to Cristobal E. Roubert and Maria Hernandez. He... View Obituary & Service Information

The family of Alberto Roubert Sr. created this Life Tributes page to make it easy to share your memories.

Alberto E. Roubert Sr. passed away peacefully in his sleep on...

Send flowers to the Roubert family.