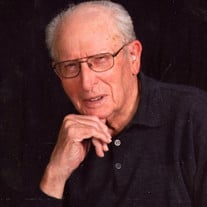 A.B. Stewart was born March 3, 1924, in Graham, Oklahoma, to Forest Wilson Stewart and Mary Pauline Conrad. A.B. passed on August 14, 2019 in Oklahoma City, Oklahoma. A.B. is survived by his wife, "Lady" Lora Stewart of 41 years, his children, son Tom Stewart; daughter in law Kathy Stewart, his daughter Mary Sellmeyer; son in laws Jon Sellmeyer, and Bill Duncan, his son Mike Burnett; daughter in law Kelly Burnett, daughter Brenda Williams; and son in law Brian Williams and daughter in law Nancy Stewart. A.B. is also survived by 8 grandchildren and 9 great grandchildren. Preceding A.B. in passing is his son the late James Stewart. A.B. grew up in East Texas oil fields. In 1941, he earned the rank of Eagle in the Boy Scouts. Even at 95 he often referred to things learned in Boy Scouts. He graduated from Union High School in May of 1942 and immediately enlisted in the Air Force and was deployed to the pacific Theater in World War II, and later served in the Korean Conflict. Upon his honorable discharge from the military, A.B. joined American Airlines initially as an A&P mechanic. Over the next thirty five years, A.B. rose to become the President of the American Airlines subsidiary Aviation Technical Support, (ATS) of Waco, Texas. A.B. later acquired ATS from American Airlines where he continued to work on the development of aircraft noise reduction products for the Boeing 707 and the Douglas DC8. In 1996, following the Value Jet crash, General J.B. Davis, under orders from President Bill Clinton, appointed A.B. to restructure Value Jets, aircraft maintenance operation. In 1993, A.B. joined forces with his son to establish Stewart Industries International, a commercial, aviation parts, maintenance and modification provider where he was involved until his passing. A.B. was selected as a Charles Taylor Master Mechanic award recipient. This award is issued by the FAA, to individuals holding an Airframe/Power Plant certificate who have contributed a minimum of fifty years of continuous service to aerospace industry. In 2014, A.B. also participated in the Honor Flight for WWII Veteran to view the Fallen Soldier's memorials in Washington, DC. A Funeral Service to remember and celebrate A.B.'s life will be Monday, August 19, 2019, at 11:00AM at Edmond's First Baptist Church. Burial will follow services at Memorial Park Cemetery.

The family of A.B. Stewart created this Life Tributes page to make it easy to share your memories.